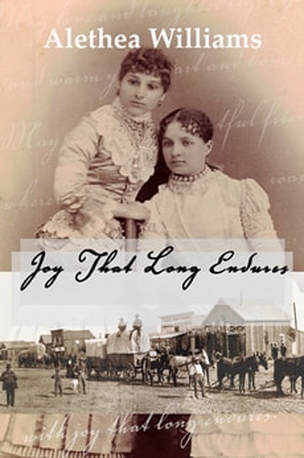 HAAWWWW. HAAAWWWWW!
Well might the mule sound amused, Devin Cavanaugh thought, as he pondered the present state of his life while hoisting another bag atop the pile in the wagon. It took only a glance for the man to resolve anew that this Wyoming Territory was a rough, raw place. The harsh landscape proved hospitable to equally raw weather: the wind had finally let up after an earlier blow so ferocious that loose dirt spiraled in a brown cloud two miles high. Now, with a sudden streak of lightning and vicious crack of thunder, rain cascaded in blinding sheets, turning the normally mindless job of loading the wagons into a wet, miserable business indeed. And to top off the whole soggy mess, there was Caleb Wilson and his fit of temper, accompanied by a veritable geyser of raw language. Wilson’s tantrum was coarse enough that Devin almost expected clouds of steam to emanate from the man’s mouth along with the steady flow of heated cussing aimed at one of the lead mules.
“Ya bacon-faced baggage, I’ll strip the hide from yer jingle-brained gawdamned bones! Hold still, ya stinkin’ Tom turd jilt! By gawd, I’ll whip the skin clean off from yer scrawny fundament once I get ya fully hitched, ya useless scraggy whorepipe!”
Haawwww. HAAAWWW! Tiberius didn’t whinny like a horse or bray like a donkey, but instead emitted a loud, distinctive trumpet of sound something in between the two. Devin stood idly by now, trying to stifle the grin he felt spreading across his face as Tiberius, the smartest of all the mules, once again slipped the collar and stepped backwards away from Wilson as they danced around each other in the slop of the corral. The big gray mule, displaying a large, impressive set of yellow dentition, even dared to taunt Wilson again with his signature bellow while the man once more responded by filling the wet, stinking air surrounding them with a new roar of helpless, angry curses. Recently employed at the freighting company, Devin had asked about the mule’s unusual name. Cal had replied, “Old Beery? Why are you so all-fired eager to know about what some addled army officer called his cussed, sulky mule? Maybe ya ought to read your Bible.”

“So you think Tiberius might be a name from the Bible?”

“I said so, didn’t I? Ti-beery-us was an Old Testament king, if you’re so almighty eager know. Now stop wasting time with chin music and get back to work.”

It hardly seemed likely that Cal passed time reading his Bible any more than Devin did. He probably just asked someone with some education where the name originated. Although Tiberius didn’t seem to mind the whole majestic moniker, he didn’t appear to appreciate the nickname Cal bestowed on him. Just to show who was in charge, sometimes Tiberius refused to cooperate after a bout of Cal’s sneering. Today was a good example. When the august-named mule continued to tease an increasingly frustrated Wilson, who was not yet fully recovered after a night of hard drinking, the man finally gave up and threw down the collar with a rather sodden jangle of hame bells. Eyeing the mule as he deliberately uncoiled a long, braided black whip he carried tied to his belt, he growled in a low voice, “I’m warnin’ ya now, Beery. I’ve had enough, ya two-handed slack-baked put. I’m about to lay open yer no account hide, if yer full and total cooperation ain’t im-mejit-ly forthcoming. Understand me, ya addle-pated scummy effusion: we are done playin’! We will get down to business now, and that’s my last word on it.”

The pole corral containing the man issuing the ultimatum to the mule, located in the little settlement of Bryan City in Wyoming Territory, was one of the West’s ubiquitous, hurriedly built “magic” towns—slapdash settlements of raw buildings and raw roads that rose seemingly overnight. Its unpainted shacks of splintery up-and-down planks faced the tracks of the recently completed Great National Highway in a long lane of equal parts rutted, gooey mud and smelly, disintegrating horse droppings. This type of settlement typically petered out at the far edge with a hastily dug cemetery, and Bryan was no exception. After the completion of the Pacific road and the sudden collapse of employment as well as population in the territory, the little town had settled into a regular, if small, grid of shops and canvas dwellings. Bryan clung to life as a supply and service settlement that sold goods of every kind to the railroad workers who remained in the area, as well as haulage to the gold mines to the north. Others of its kind, not so lucky as to be sited near such irresistible lures—the hellhole named Benton came to mind—faded into railroad history just as quickly as they had blossomed.

Devin was equal parts grateful to have found steady work in Bryan upon completion of the road, and ashamed at having to accept such demeaning labor. He had most recently been an iron man to the Casement Brothers, contractors building the Union Pacific, and still had the brawny arms to prove it. In his own opinion he had taken a mighty tumble since the road building crews disbanded after the race to finish ended at Promontory a few years before. The last thing he ever dreamed he might eventually end up doing for a living, while he had been busy helping to build the road, was stoop to tending mules. Although if he did say so himself, he thought he was a sight better at the job than Wilson. He had gotten pretty good at convincing the animals to cooperate without resorting to violence, but fortunately or unfortunately—it remained to be seen which for Tiberius—it was actually Wilson who attempted the harnessing as Devin stood by and watched. The winner of a little bet the two men had made could name his prize, and since Devin was aware Wilson typically had little money in his pocket, he had asked instead that the boss take the job of harnessing the team on the next trip out. Devin hadn’t expected that such a minor wager would pay off so well in terms of entertainment alone. But now, eyes rolling in their sockets toward the sight of the whip, bedraggled with the continuing heavy downpour and apparently judging the wiry muleskinner truly wearied of his latest performance, Tiberius suddenly turned meekly obedient, finally allowing Wilson to get down to the business of collaring.

Devin glanced sidelong through the rain at the narrow porch of the freight office adjoining the corrals. The little boy waiting there hadn’t changed expression, no matter if his ears were being singed red by Wilson’s swearing or his tender feelings assaulted by the threat of mule blood mixed with mud. He stood patiently, as if the long minutes he had been staring through the deluge, watching the business of getting the mule team into their proper places to pull the wagons, was what every boy of about six years of age should be doing on this miserable morning of what Devin was fairly sure was a school day.
Although he couldn’t of a certainty have sworn what day of the week it truly might be. Odds were equal for it being a weekday or even a Sabbath. School could be in session or out. After all, it made no difference to him. At twenty years old—at least as near as he could determine he was about that age—Devin Cavanaugh had less than a month’s formal schooling under his belt. And for sure he had never in his life been kitted out like the little boy waiting behind the porch rail. The lad, apparently without a twinge of embarrassment, sported matching coat and cap and knickers of a fine summer weight blue wool, a pair of navy-striped stockings, and high button boots. At an age approximate to what he judged the boy was now, Devin had already been living on filthy New York City streets, ragged and dirty and surviving the best he could on his ability to quickly determine whether the better part of valor involved standing up for his bit of territory carved out of the Five Points area or else turning tail to run, and so live to fight another day. This little lad here now, clothes growing more darkly damp by the minute no matter that he stood under the shelter of the porch overhang, didn’t look as if he had ever had to fight for, or run from, anything in his short life.

But, in fact, the small boy did call up a tiny bit of sympathetic reminiscence in the former iron man, reminding Devin just a touch of that familiar boy from long ago boy. Perhaps it was merely the child’s wretched, dogged persistence, standing there with his clothes soaking up moisture in the wet early morning, uncomplaining as he watched the capture and collaring of the team. Perhaps it was no more than the suitcase at his feet, a nice, unscuffed, oxblood-dyed leather valise secured with shiny brass clasps. To be sure it did not resemble at all the grim pasteboard specimen of the several trips Devin had carried while chasing his destiny as the rails were laid west. The fancy valise belonging to the boy surely must be a fond farewell gift to a beloved child, not an anonymous handout courtesy of one or another of the big city charitable organizations trying to help rid the streets of the teeming Eastern cities of orphans, half orphans, and other assorted unwanted children who lived in the underworld like so many rats.

“That useless little doodle still standing about?” Wilson raised his chin questioningly in the boy’s direction, breaking into Devin’s musings, as on the street outside the corral he backed a now meek and docile Tiberius into the traces.
“Sure looks like it,” Devin agreed. After all, Wilson was the boss. If the man wanted to ask stupid questions about what was plain to anyone with eyes to see, and to call their passenger names to boot, it was his own business.

“What does the young coxcomb want?”