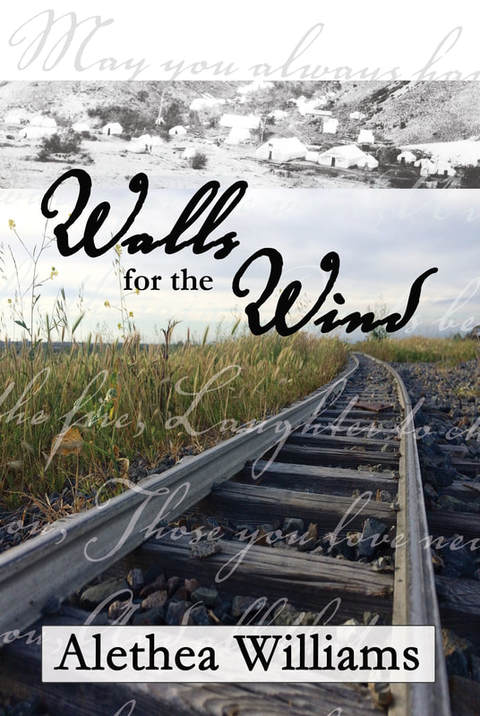 ​
WALLS FOR THE WIND

May you always have walls for the wind,
A roof for the rain,
Drinks beside the fire,
Laughter to cheer you,
Those you love near you,
And all that your heart might desire.

Panic bloomed, threatening to choke Kit as she gasped for breath. Where could she be, the small girl brought all the way out to the wilds of Wyoming from New York City? So certain she could make the best decisions for the little golden-haired girl, Kit had gone against her own upbringing as well as the stern advice of those older and wiser in order to make this journey west. Now here was her little family plunked down in the raw boomtown of Cheyenne, and she had lost not only her own direction but also the child entrusted to her care.

Where could Hannah be? Where?

The streets slimy with melting snow and horse manure, Kit struggled to keep her footing as she ran frantically up one and down another, screaming Hannah’s name. Unable to think where to look next, at last she stood helplessly wringing her hands. Tears made slow, cold tracks down her face.

A door opened behind her, and a voice full of concern said, “Kit. As luck would have it, I was just coming to look for you.”

And wouldn’t you know it? The voice of the very man who seemed to turn up at every instance of her bad luck. Indeed, he might be the root cause of her ill luck ever since she left New York City. And to think he had once promised to be her salvation, did Patrick Kelley of the dancing Irish green eyes.

But what were his true intentions [as he took hold of her arm]? To save her? Or to be her final ruination, as she suspected?

“Let me go.” She tried to wrench her arm away.[When had he grabbed her arm?] “Hannah is missing. She’s lost. I must find her!”

“Ah, leannán, don’t take on so,” he said in a soft, cajoling voice. “Hannah is safe and sound. I have her.”

Kit’s bones suddenly felt soft, as if they had turned to mush, and her knees started to sag. Ah, God, and wasn’t her luck running true? Patrick Kelley, the very man! Of all the places in Cheyenne that Hannah might take refuge, of course it would turn out to be with saloon-keeper, and the means of the erosion of many a young woman’s morals, Patrick Kelley.

“Come inside, please, Kit,” he insisted, tugging her arm. Her feet were frozen inside boots soaked with street muck. She felt herself weakening toward him, the warmth and light of him, and of the place behind him, beckoning seductively to her.

She had come so far, all the while thinking she knew what she was doing. Most of a year had passed since setting out. She had followed a path on a journey of more than two thousand miles, a path of righteousness that she thought would answer all eventualities.

And then her path, and the paths of the children, crossed Patrick Kelley’s.

Now once more she must break down and choose between her lofty principles and a future tied to Patrick Kelley. And she found, to her utter consternation as she stared into eyes the color of shamrocks, she…still…couldn’t… decide.

The woman crouched on the floor. Clutching a bloody rag in one hand, she held a big-eyed, trembling little girl with the other. The bare room contained a stove and stovepipe, more than most lodgings boasted in these warrens of rented quarters above and below street level businesses, but it obviously had not been lit for some time. Kit Calhoun, standing over the mother and child, felt colder indoors than she had outside. She rubbed her hands together self-consciously, grateful for the donated gloves that protected her fingers. At the same time her heart twisted with pity for the woman and little girl, dressed in tatters that at this stage of decomposition might not be useful even for washing floors. The room was devoid of furniture except for two [more] piles of [more] rags that apparently served as beds; there was no evidence of even straw shakedowns on which to lie.

Beside her, Reverend Ignatius Howe cleared his throat. “Where is your husband, madam?”

Kit’s employer and the founder of the Immigrant Children’s Asylum continued his interrogation, pausing only when bouts of uncontrollable coughing shook the exhausted woman’s gaunt frame. His intentions were pure, but Kit knew the kindness of his heart only from long exposure to his booming voice and extravagant gestures. His imposing figure towered over the poor creature huddled against the wall, and once more, when the woman cringed instead of answering, Kit felt the strong urge to step in front of Reverend Howe and intervene.

Turning her head aside, Kit bit her lip and willed herself to hold her tongue. At last the woman whispered in heavily-accented English, “My husband is dead.”

“See, Katherine. The children are half-orphans,” Ignatius Howe said to Kit. He seemed unaware that what he considered a murmur reverberated in the tiny, bare-walled room. He raised his voice to its normal foghorn pitch and addressed the woman again. “Madam, I beg you, will you allow us to take custody of this child?”

In response, the woman tried to fit more tightly into the corner. Her bony arm coiled around her daughter, squeezing the small body to her blood-spattered bosom. In response the child’s thin crying began to rise toward frightened shrieks.

Reverend Howe’s eyes sought Kit’s. “It is ever so difficult,” he said. “It is the nature of mothers, not wanting to let the babes go, no matter the wretched circumstances.”

Kit, equally torn over what they were attempting to do, laid her hand on Howe’s arm. “Let me try, Reverend,” she said in a whisper.

His hazel green eyes probed her face, obviously gauging her readiness. She was new to this job. Today was her first foray into the grimy New York City streets on behalf of the asylum. Could she do it? Finally, he nodded.

Lifting her long skirts, Kit knelt next to the woman and screaming child. Tentatively, she reached her fingers toward the woman’s angular shoulder. The woman raised tear-filled, pleading eyes, and once more Kit’s heart wrenched. She sometimes felt a guilty twinge of dissatisfaction when she examined her plain, slim reflection in the mirror. But if she gained anything from this expedition to the notorious Five Points neighborhood, it was an appreciation for what she had. Her environment was opulent in comparison to what others coming to these shores must endure. This woman, not much older than Kit herself, surely considered today’s charitable visit the final betrayal in her short, miserable life. For it was plain to anyone she was dying.

The child’s cries gradually subsided to tired sniffling. This close, Kit saw the telltale reddened welts of rat bites on the little girl’s arms and face. “Do you have food?” Kit whispered.

The woman’s bird-like chest heaved as she tried to stifle another burst of coughing. “My son.” She paused, gasping. “He is good boy. He works. Newsboy. He brings home money. Food.”

Kit slowly shook her head from side to side, wondering how a young boy could run the gamut of desperate starvelings of all ages in this neighborhood in order to bring in any food. Well, today marked the end of that. “Frau Goff, you must listen,” she said softly. “Your son was arrested by the constable. Helmut will not be coming home. Reverend Howe is trying to convince the magistrate to release the boy into our custody, rather than have him spend ten days in the public Juvenile Asylum under the influence of the older, hardened hooligans incarcerated there. It was Helmut, Frau Goff, who told us where to find you.”

At the news, the woman’s hand flew to her mouth. Her eyes distant now even though they never left Kit’s face, she moaned, rocking the little girl back and forth. “Ah, Gott in heaven, what shall we do now?” she pleaded under her breath.

“You need to go to the hospital, Frau Goff,” Kit urged, even though she knew the charity wards were full to bursting with sick and dying immigrants. Reverend Howe, however, was prepared to use all his considerable influence to convince the Baldwin sisters to take just these three more into their already overburdened care.

“I cannot go to hospital.” The woman covered her mouth, throat rasping as she coughed up more blood. Twin spots of fever-induced color suffused her sallow cheeks. “Then Hannah would have no one.”

The woman’s hands lovingly kneaded the little girl. Kit waited, fingertips resting on the woman’s arm. Puffs of vapor escaped the child’s rosebud mouth, freezing as her warm breath hit the cold air. Hannah’s eyelids drooped as she lay quietly now in her mother’s arms, and she blinked sleepily.

“It makes no difference if I agree, yah? All you have to do is wait. When I die,” the sick woman said in a dull rasp, “my children will truly be left all alone.”

Kit swallowed the reply that wanted to spill from her lips, words of false hope and promise that the woman would recover. Perhaps, with time, good food, rest and a change of climate, there might have been a chance. But as it was, destitute and starving and already ravaged by her illness, there was in truth little the medical profession could do for Helga Goff.

“Will you sign?” Kit asked in German, fingers tightening on the woman’s skeletal arm. Educated at the asylum in languages, as well as painting and piano, at least some of her training stood her in good stead this day. “Will you give us the opportunity to shepherd your children toward a better life?”

The widow Goff studied Kit with burning eyes. “You will keep Helmut and Hannah together?” she pleaded, also in her native tongue. “Brother and sister always. You will not separate them? Make your solemn pledge to me now, before Almighty God.”

“I assure you the asylum will educate them and find them a home.”

“No! To you! To you alone will I give up my children. Promise me they will be together. Always.” Her voice fading, the woman’s last word ended on a sigh. Her small strength in defense of her children spent, her head drooped toward her chest.

Kit craned her neck, looking frantically over her shoulder to Reverend Howe for guidance. He held out his hands, palms up. “You have chosen to do this work, Katherine.”

Finding no help from the bear of a man in the massive greatcoat, Kit turned her gaze back toward the woman and child. Looking down on the little girl’s soft, golden curls, she said, “Very well, Frau Goff. I promise you that Helmut and Hannah will remain together.”

The sick woman raised her head. For an instant she searched Kit’s face. Then apparently reading truth there, she reached unsteadily for the pen that Reverend Howe had already dipped in ink. Her lips moved as she struggled to read aloud in English:

This document certifies that I am the mother and sole legal guardian of Helmut Goff, age eight, and Hannah Goff, age two. I hereby willingly agree for the Immigrant Children’s Asylum to provide them a home until they are of age. I further promise never to interfere in any arrangements made on their behalf.

Once more she raised fever-bright eyes to Kit’s, as if seeking a way out of signing away her children. But both of them knew it was too late. There was no rescue in this world for Frau Helga Goff. Shoulders rounded in defeat, she lowered her eyes to the release form and signed in a spidery European hand.
​
Walls for the Wind Slide Show
​